Digital Media Blog Like sun on a rainy day, new media for the NW. 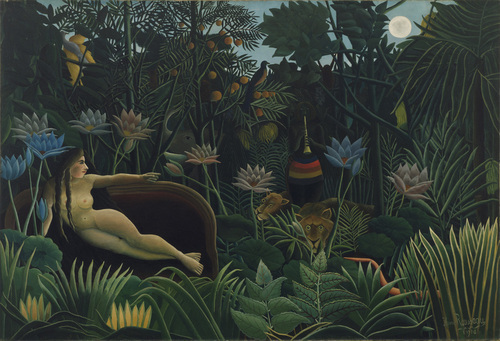 While in NYC, one of our first and most coveted stops was to the Museum of Modern Art. While inside, I could not help but feel my heart beat stronger as I saw up close the works of some my favorite artists.  However, I was also intrigued by how, upon seeing certain artists’ works up close, I became a new fan of work I had before not been so interested in.

Henri Rosseau (1844-1910) surprised me. I had seen examples of his work in print, but being in the presence of both “The Dream” and “The Sleeping Gypsy” brought up a wonderful feeling of joy that totally took me off guard.

Rousseau is known as a post-impressionist “primitive” artist. He was self-taught, and did not seriously begin to paint until he was in his forties. His work is seen as being dimensionally flat, colorful, and dreamlike, with exotic subjects that were trending as artists began to explore European colonies.

What grabbed me in the MoMA about Rousseau were the vividness, in person, of the dream Rousseau was presenting. The paintings were large, intensely colored, and I felt as if I could walk closer to them and more magic would be imparted to me. In print, the images seem interesting, if not only for the subject. In person, they were mesmerizing.

Pablo Picasso’s (1881-1973) work was in the same room as Rousseau – in fact, they were friends while they were alive. Frankly, I hadn’t given Picasso much thought in many years. He is such a standard, and I think after I had been to the Picasso Museum in Paris when  was younger, I had been properly blown away and then tucked the memory of his work into the recesses of my brain.

But seeing Picasso’s work in the MoMA rejuvenated my admiration. When I had first seen Picasso’s paintings up close, I had not been an art student. I had not come nose-to-nose with the brushstrokes as I did now. I was surprised how loose his strokes were, how confident. Seeing “Ma Jolie” and  “Les Demoiselles d’Avignon” showed me what a master he really was.

What I find interesting about both Picasso and Rousseau is how the legends built around their personalities and personal histories has influenced the popularity of their art. It is rare for art to be appreciated for itself alone; the life of the artist is almost always as infinitely picked over as the asthetic aspects of the work. Rousseau’s reputation as an “untrained” artist made him all the more fascinating; Picasso’s romantic & political life and talent for self-promotion are also tasty subjects for conversation. Sometimes, I struggle with this, and believe that these legends deserve to be forgotten and let the work stand alone. And yet I also know that the interpretation of the context in which the artist created can provide another important aspect of the art itself. Regardless, seeing the works of Rouseeau and Picasso were fascinating to see in person.

This page is the unofficial blog of Digital Media Arts at Olympic College, it is a place for students to share ideas and their work.