iDEA lab blog Like water for the desert, New Media for New Mexico

Please take the time to vote for your favorite!

These videos were shot by the kind folks at ITV.

Rijksmuseum has lots of free art!

Wisely, the Dutch museum has offered its collection on-line, downloadable!
Museums are the repositories of our cultural memory- The works over a certain age must be available free of ©.
As one might expect, the progressive Dutch have taken the lead on this…
(de Ruyter is dancing in heaven, as he once did on the “Dutch” Channel)

Hopefully more contemporary artists will post Hi-Rez versions of their work (Bill Viola, Rackstraw Downes: are you listening?) to at least look at on-line… 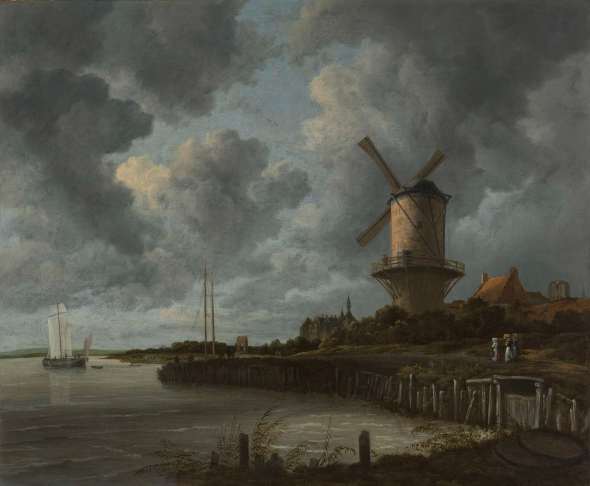 I’m trying to remember how I found out about Sarah Sze. I’m pretty sure it was from my Women in Art History class last semester. I did a search for “women installation artists”  and was like, whoa, how come I hadn’t heard about her already? Likely answer: I’m a newbie art undergrad. She’s pretty famous.

Sarah Sze is an American artist, born in 1969, works and lives in New York, has a BA from Yale in 1991 and an MFA from the School of the Visual Arts (1997). Her resume reads like an artist’s fantasy. She shows internationally constantly and has her work in many galleries and museums all over the place (see bottom of article). Probably one of the most unique locations is on the High Line in New York City, which Anna, Peter & I had the pleasure of visiting last year. The photo below, though, is from an exhibit in Brazil. 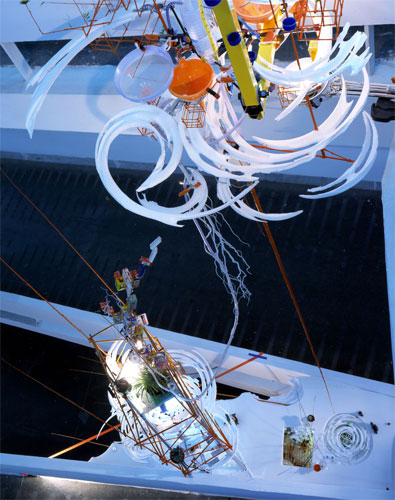 Photo: Sarah Sze “Everything In the Right Place” 2002, Brazil Bienal

Her work is fun, whimsical, and uses everyday objects, plants, fans… she runs the gamut in her materials. Her works seem to stretch through the spaces where they are installed, with many points of interest and activity. I really like her use of line, shape, and color. Her work makes me feel like I am at a birthday party – it is happy, exuberant, and pulling together many elements of life.  In the Art in America Magazine article linked below, she says, “I’m interested in painting, sculpture, photography, architecture—bleeding them together in a practice that’s inextricable for me.” It’s always interesting to read interviews with artists, rather than read articles written about them. Art criticism is rarely done well (read: boring), and as I look through different articles, it’s clear they often rip each other off trying to come up with something to say that doesn’t venture too far from the norm.

Soooo – with that in mind, I may vote to shut up now and let you look at her work for yourself and read an article where she is interviewed.

A sampling from 4D and Studio I. Yay idEA students!!

The Cure for Greed

with Nick Carter and Dr.  Jost

goofing with brushes on ipad

the GIF animation loses the color… 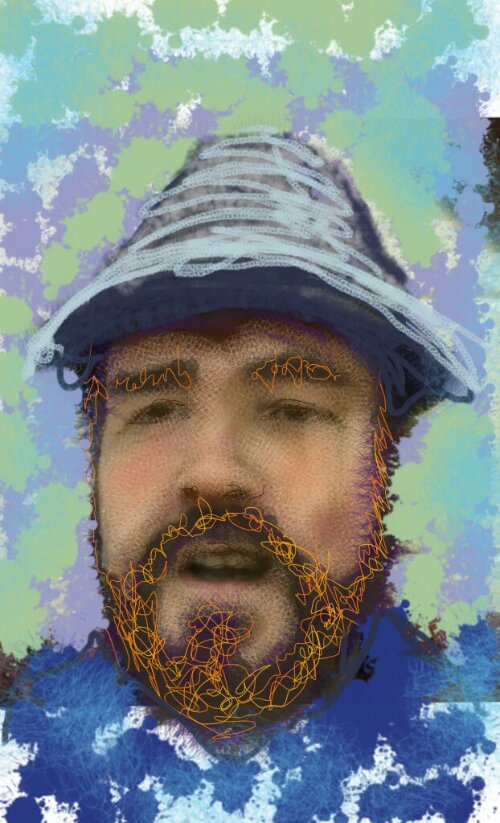 A collaboration between the iDEA 4D class and the Sociology department led to the creation of one of the more involved shoots of the semester.  The craziness began when Prof. Peter Bill was approached by Noel Shearer, a psychology student at WNMU, about making a film for one of her class projects based on David Rosenham’s article “On Being Sane in Insane Places”, detailing a study in which sane people managed to get admitted to mental institutions and then details the problems they had  getting discharged.  Can sane people really be that different from insane people?  The concept intrigued Robert Torres and Anna Davis, and a script was written and the students in the 4D class cast as various characters.  Permission was obtained to film in the abandoned Ft. Bayard Hospital, a creepy locale if there ever was one.  The entire class had a fun time getting into character-maybe a little too much fun? As a class we learned about the details involved in a larger shoot, as well as some of the issues that arise as more people get involved in a project.  This project was also a great collaboration between different departments at WNMU and the Silver City community. This film also illustrated the fact that digital media can have a broad application for many fields.. such as making a dry intellectual paper into a fun film! And Sociology class presentations do not have to be boring. Noel got an A, and hopefully our iDEA students are no more crazy then usual…

eyeborg: the future is now

As our new tools develop, so too do interpretations and critiques of them:

can anyone figure out how she does it?

will social media save us?

in a rapidly evolving culture, where families/regions/nation states seem to be disintegrating before our eyes, can social media become the glue that holds us together?

or is it the enzyme that finally brings a true global revolution?

the future is in algorithms

Here are a selection of pics from India

I think of my photo explorations as moving images– thus a series of stills to be made into movies and projected as installations, or live. It can be very difficult to pull stills from  them– I tend to choose views that I think will work with something else, or collage, and where movement of crowds, or light is most evident.
So these are pics (mostly) selected from timelapses (edited movies to come)

India certainly presented; beyond the normal technical considerations of setting up the tripod, getting the F stop and shutter speed correct, focus, ISO etc;  physical difficulties– crowds of touts surrounding one, extreme (108 degree) heat, such crazy pollution it nearly induced an asthma attack… thus the paucity of shots from Delhi, where these things were most extreme…

I am playing with time in these shots– with slow shutter the crowds becoming Delhi djinn, or Shimla water.

stuxnet- you will know this name, sooner or later

stuxnet is a computer virus, probably created by some combo of NSA/CIA/Mossad, that shut down the iranian nuclear complex last year-
so far “yeah!”  the problem of course is that it is the first “real” (as in causing of physical damage) virus- both russia and china, and now iran have significant “cyberwar” capabilities- so look for stuxnet II, hitting an ATM/powerplant/traffic control system near you!

all of this points to the fact that we need to have back ups to our data on the cloud, alternatives to cell phones/internet devices dependent on the internet, and remember as we use computers every day, they can be used against us. (did anyone learn anything from the cell phone/EMT outage last winter in silver?)

An infographic dissecting the nature and ramifications of Stuxnet, the first weapon made entirely out of code. This was produced for Australian TV program HungryBeast on Australia’s ABC1

an excellent discussion of the internet by Will Self

Just go to savevid.com, enter in the URL for your YouTube video, and then select the file format you want.  Pretty handy! Thanks to Ivan for showing me this today.

Sometimes footage is protected, and then it doesn’t work.

Mechanics of Bicycles is a video about bikes in Seattle.

This page is the Blog of the WNMU New Media iDEAlab- Our lab works with students and faculty to create new media forms that will help humanity evolve to meet the challenges of the 21st Century.